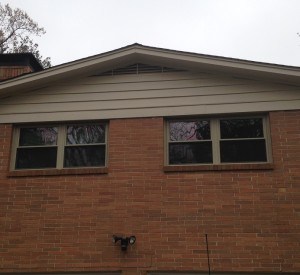 Carol first contacted Durante Home Exteriors at the Spring Pelham Home Show in March of 2012 while shopping for  replacement windows.  Their old aluminum windows were original to the home and over 50 years old, not energy efficient nor did they block much sound.  The windows needed to be replaced!

The Schaffhausen’s told us that they ultimately chose Durante because we were the most responsive, explained everything, and they loved the salesperson.

They said to us, “Frank was great and knew the product.  We were impressed with the product and the way the windows would look.  We were not disappointed!  The windows are fabulous!” 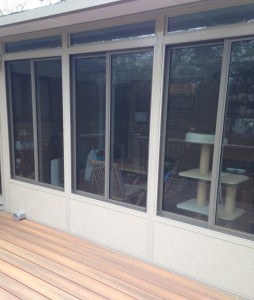 At the end of the year, during our annual Customer Appreciation Sale, Carol called us back out to quote them for a new sunroom.

They were wanting to replace an old patio that Carol’s father had built using concrete block edged with brick to match the house.  He had built the patio around a very large oak tree that was later removed.  When the tree was removed it damaged some of the brick and block.  It was an eyesore and they needed it fixed!

Carol told us she always wanted a sunroom that overlooked the backyard , a place to relax and watch the birds.  Carol and her mother decided to contact Durante to see if this was something we could do.

We were able to construct a sunroom like they wanted, and now they now use it year round.  Carol said to us she uses it on weekends as she works and her mother uses the sunroom every day.

And Now, a Composite Deck! 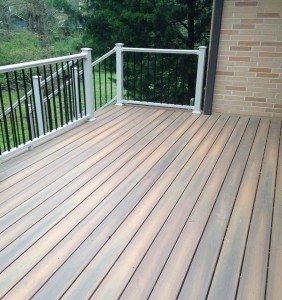 Carol called us back out because they needed a new deck for the new sunroom. Before their new composite deck, they had no deck at all.  When Durante added the sunroom, the Design Consultant, Frank, explained how they could eventually add a deck to complete the look of the house if they so desired.

The sunroom was designed so the steps could be removed and a deck could be added later that complimented and completed the space.  Carol wanted to go ahead and add the deck to complete the space. Frank assisted with the design and our customers absolutely love it!

They Are Happy They Chose Durante, and You Will Be, Too!

The Schaffhausen’s chose Durante three separate times. Why? Because we were responsive to their needs and actively listened to what they wanted, then we delivered as promised. WOW! Three. Separate. Times.

And we can do the same thing for you, too!

If you have ever thought about improving something on your home, let Durante help!

Whether you need to replace those old draft windows, or you need to upgrade an old deck or patio, Durante has the resources you need to get it done. We offer an extensive line of quality doors and windows, vinyl siding, composite decking and custom sunrooms and patio enclosures.

We back everything with ironclad warranties and our customer service is off the charts! If you call Durante Home Exteriors, you will be blown away with how GREAT you will be treated!

These Customers Purchased Products From Durante, Not Once, Not Twice, But Three Different Times!  Here’s the Scoop On What They Did.

We ultimately chose Durante because they were the most responsive, they explained everything, and we loved the salesperson.
Carol Schaffhausen
CUSTOMER REFERRAL PROGRAM

Refer a customer and you’ll get a $100 gift card. Refer 7 customers and you get

$5,000!
“Some restrictions may apply. See Design Expert for details”


Start Earning
We're not a chain
or a franchise- We're Local

We are a family-owned business, which means you will be treated like you’re part of the family. When you call Durante, you will always speak to a friendly, live person who’s ready and eager to help.

We don’t want you just happy with our work, we want you thrilled with our work. As in, tell-the-whole-neighborhood-about-it happy.